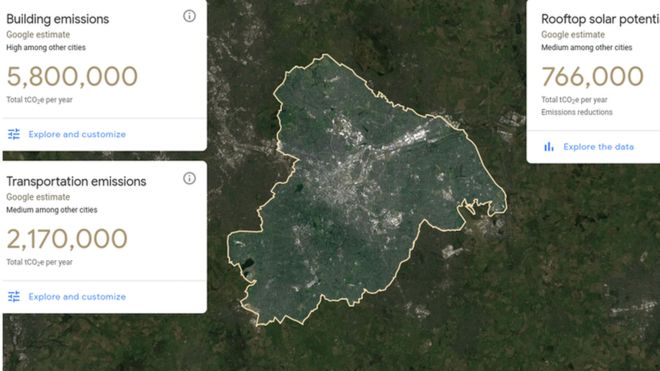 A tool Google offered in the US to help cities measure pollution and emissions levels is now available in Europe.

Google will initially offer the tool to Birmingham, Manchester, Wolverhampton and Coventry, Dublin and Copenhagen.

It plans to add more cities on other continents in coming weeks and any city can to nominate itself via an online form.

The dashboard is designed to help cities see what changes they could make to lower emissions, such as creating more bike lanes or installing solar panels on buildings.

In a separate project, Air View, Google Street View cars have been measuring air pollution as they drive through cities, including London and Copenhagen.

And this data will also be shared via the EIE tool.

West Midlands Mayor Andy Street said: “We have already declared a climate emergency in the West Midlands and are now working up our plans as to how we become carbon neutral no later than 2040.

“This data being made available across our three cities by Google will make a substantial difference to our efforts and will help us target specific areas to achieve greater results.”

Global Covenant of Mayors for Climate and Energy executive director Amanda Eichel said: “We believe EIE can serve as a critical first step for city sustainability teams to better assess their current situation and more efficiently track and monitor their progress in meeting their climate protection goals.”

Partnerships between cities and technology companies have not always gone well, though.

Google sister company Sidewalk Labs wants to build a “smart” neighbourhood in Toronto but has faced strong opposition from residents, with a recent report suggesting a lot of its suggestions for innovations were “tech for tech’s sake”.